See brilliant performances from some of the brightest lights in Canada’s dance scene at each festival event. Learn about these stellar companies and check out previews of their exciting works on our website and social media channels.

Splintered by Breath in Mvmt.

Featured at the June 29 Emerging Artists Performance
7 pm at Eldon House
Get tickets at www.onstagedirect.com/ldndancefest

Choreographer: Melisa Boose.
We split into fragments when faced with fear and the unknown. Every choice reaction determines the next and we can either feel solid on the ground we stand upon or succumb to the hole in the ocean floor. Collect the pieces with us.

Breath in Mvmt.’s work has been described as breathtaking, powerful and delivers much for the senses to absorb. Students and professionals from various disciplinary backgrounds and studios audition to take part in her work. Assistant Artistic Director at Sound in Motion and founder of Breath in Mvmt., Melisa has been a choreographer and instructor for seventeen years and is gracious to continuously learn alongside her students. Melisa’s work is crafted collectively around the narratives of the dancers’ lives, giving her pieces to an authentic foundation. Award winning and known for creations that challenge the imagination while evoking visceral reactions, Breath in Mvmt. is proud to train dancers in movement and views dance as a way to build community. Learn more at https://www.facebook.com/BreathInMvmt/

Fuel to Fire by Sound in Motion

Choreographers: Julie Mytka & Melisa Boose
As a graduate of Ryerson University’s Dance Performance Program (2001) and from the Royal Academy of Dance Certificate in Ballet Teaching Studies (2015), Julie has a wealth of understanding in the method and progression of teaching dance. Her experience in teaching is complemented with her time onstage as a performer. Some highlights from Julie’s performance career include touring internationally with renowned Canadian Magician Richard Forget (Canada, USA and China); dancing in the historic Diamond Tooth Gertie’s (Dawson City, Yukon); performing in musicals such as West Side Story (the inaugural High School Project at The Grand Theatre, London ON), Guys and Dolls and Sweet Charity (London Musical Theatre), multiple Fringe Festival engagements in Toronto and London, ON and Halifax, NS; improvisation theatre with Shadow Productions (Calgary, AB) and a dancer in London’s own Breath in Mvmt.

Choreographer & performer: Tori Kuhn.
Tori Kuhn, a young and vibrant dancer/aerialist on the way to fulfilling her dreams. At the age of seven, Tori started her seven year competitive dance career at Studio Dance Pointe in St. Thomas. Always restless and looking for something new, Tori took on the wonderful world of cirque. After 6 years and 4 studios as far away as Detroit, Tori is now training with Savannah Crittenden, a performer for LPC in LA. With dreams of taking her career to the professional level some day, Tori is working to expand her knowledge and prepare for auditions. 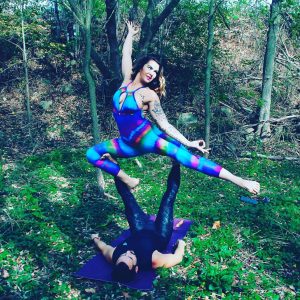