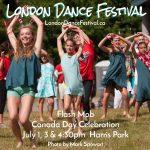 Join our Flash Mob
The Flash Mob is a fun and easy dance created by local artists and performed by the community. No dance experience is required and all ages and abilities are welcome. You can learn the moves from the instructional video, or at one of our workshops. Then come down to our Canada Day Celebration at Harris Park on July 1st at 3pm and 4:30pm and join one or both performances!

Learn the moves! The instructional video is RIGHT HERE! 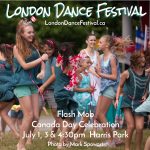 2017 Flash Mob Workshop Tour
The Flash Mob choreographers will be touring the city teaching the dance to Londoners of all ages. Want them to stop at your school, business, or organization? Contact us at LondonDanceFestival@gmail.com to book a FREE workshop. No experience required, all welcome. 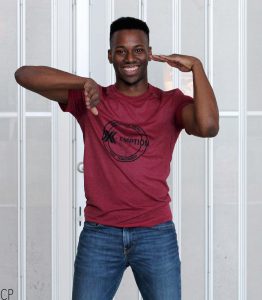 Gregory Thane  The passion for dancing/performing arts was discovered about six years ago through dance trends and still continues to this day. Gregory Thane was originally inspired by the instant gratification which dancing provided but it developed into something much more. It became a liberation of mind and soul and an escape from the burden of reality. This new-found passion turned into a more serious dedication to learning the crafts and intricacies in the art of dance. Experience was found performing in flash mobs across the City of London under the group, Dynamic Dozen.

Once the competency in dance had been achieved it became a mission to establish an innovative dancing group at the University of Windsor. This group, called X-Emption, went on to perform original choreography at various events and showcases in an attempt to demonstrate the crews’ various talents and to build experience with an emphasis on fun and enjoyment. 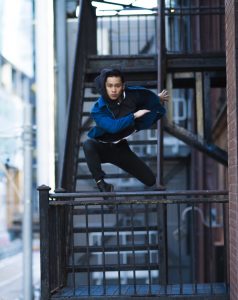 Ken Pham Born and raised in London, Ontario Ken first developed an interest in dance during high school by imitating tricks, flips and moves through popular dance movies. Ken has naturally found himself dancing every waking minute of his life eventually leading to his first dance class at the age of 17. Training at Jo Read’s School of Dance (Katrina Cavaliere, Brodie Masse), O.N.E. Hip Hop Dance Studio (Ill At Will), and PCG Vipers (Tracey Lee) allowed Ken to develop a unique versatile foundation of dance. His versatility includes ballet, contemporary, jazz, modern, partnering, breakdancing, freestyle, urban choreography, tumbling, stunting and cheerleading. A year into his dance interest, he received a scholarship from Kevin “Tokyo” Inyoue at a contemporary workshop acknowledging his unique ability and potential to become a great dancer.

Deferring his business program at Western University to further seek dance opportunities, Ken currently resides in Toronto. Ken has attended Conteur Academy receiving an apprenticeship to work with the company, The Male Initiative, and Dana Foglia’s 6-Week Mentorship Program allowing him to intimately learn from a few of the industries best, Dana Foglia, Jose “BoyBoi” Tena, Eryn Waltman, and Shavar Blackwood to name a few. Beyond these programs, Ken is frequently taking class and booking studio space over night to further develop his craft.

Ken has appeared and danced on The Next Step Season 3.5 as “Nam”. He performed for one of Royal Caribbean’s newest show, “StarWater” consisting of Argentine tango, swing, a unique flying apparatus called “puppets”, and vogue(Genevieve Da Coupal). Red Party as a straps aerialist choreographed by one of Cirque Du Soleil’s principle mover and aerial coach (Erica Linz and Allister Booth). Performed in various shows such as Euphoria (Shavar Blackwood), The Dating Game (Shavar Blackwood), Frames (Conteur Academy), Toronto Choreographer’s Ball, Fever After Dark, and Bazaar.